So it seems that my problems weren’t my own. I moved the server to San Francisco and all is well, I left the NYC server running also and it appears to have righted itself. To think that I would have been done in a single weekend if I’d used on of my existing server. My confidence at identifying networking issues had obviously atrophied because I was certain I had done something stupid.

Now all I need to do is fix up the recommend page and I’m done… behind schedule, but done.

So, I’ve let my server run for the day with the previously mentioned problem still unresolved: My server randomly disappears off the face of the internet for large chunks of time and sometimes magically reappears. No ping, no SSH, no HTTP, nothing. I haven’t managed to run a trace route or try to access the out-of-band console during one of the outages.

What have I done so far?

I play the waiting game. I’ll leave monitor.us and nlog run overnight and see if there have been any outages in the morning, if there hasn’t been, it could possibly mean that one of the other software components is the cause. If there was still an outage I’m going to spin up a new server instance and install nginx from scratch and see how that compares.

If all else fails I’ll file a support ticket, which is what I should have done last week.

Obviously I had planned Startup Weekend to be one single actual weekend, but as you may have noticed, last weekend didn’t exactly result in a full product launch. Why? Take a look at this graph:

That’s the previous 24 hours of monitoring by http://monitor.us/. As you can see there’s quite a bit of downtime and sometimes the response times are nearly 4 seconds, up from a low of 40ms. During those times I can’t even SSH into the server. There are no log entries that indicate what is happening and some googling makes is seem like a problem with either the network card or the network. I’ve install sysstat to monitor everything and I’ve moved the app over to a new instance incase it was a hardware issue.

After a weekend of sprinting I’ve nearly finished my product. I’m still working on the back end but I have a basic non-functional landing page setup and most importantly a name and a business plan.

You can check out the web app at BlankTracksApp.com.

The .com for blanktracks was taken and I was going to get a fancy domain like .co or .io but that would have put me over budget. Domain names don’t seem to matter that much anymore these days anyway, just append ‘hq’, ‘app’, or prepend ‘get’ or ‘use’.

I’m probably going to add some affiliate/referral links to buy music from listed artists along with a flattr tip jar depending on what’s compatible with the various music metadata apis.

I’m thinking of using the Spotify metadata api to check that artists actually exist in the system before the user can add a recommendation.

I have a 512mb Digital Ocean droplet set up running Python with Flask, uWSGI and Nginx. So far so good. I had some teething problems working with uWSGI, the version in the Ubuntu repositories is fairly old but I didn’t realise that until I’d been bitten by it so I had to install it from pip. This was my first time using the above stack and it took me longer to get uWSGI and Nginx talking than I’d like to admit but overall things went fairly smoothly.

I was having intermittent SSH problems with my droplet but I’ve yet to diagnose the issue.

So after a few hours of creating user interfaces and scrapping them I’ve come up with what I think will be the first page for the site. I focused on eliminating any friction that a user may have to using the site. There’s no sign-up and no instructions, just an in-place form which allows the user to enter their recommendation and submit it. Take a look. 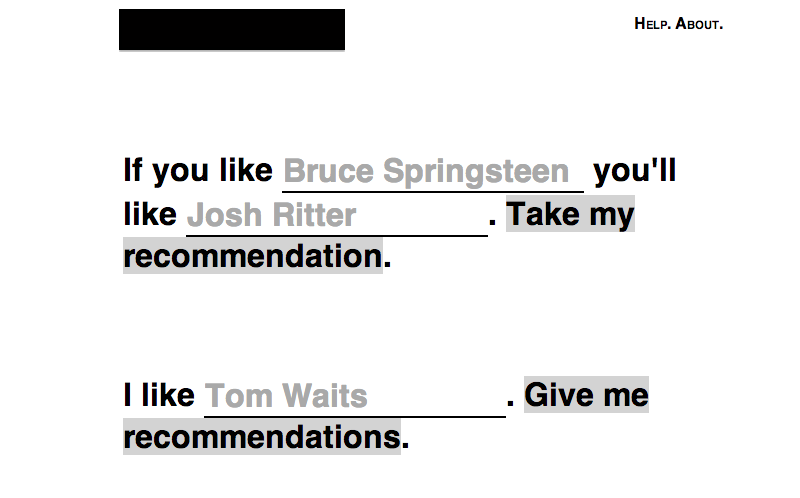 The name of the project is still under wraps until I’m sure that I’ve secured the domain name.

The backend should be fairly straight forward as long as I’m happy with the interactions I’ve defined on the front end.

So now that I’ve committed to doing this I need to come up with an idea that can be easily implemented. I’ve been disappointed with music discovery services or features so I’m going to build my own based on the premise that all of these recommendations are made by real people, not algorithms, not ‘people who bought this also bought that’. I’m not going to focus much on market research and I’m not going to search to see if my idea is already implemented, I’m just going to go for it.

How could I monetize this idea? Adwords, Amazon Affilate and iTunes downloads all seem like viable options with enough traffic.

Now, to get to work.

It’s a fabulously sunny weekend, I have the house to myself, what do I do? Challenge myself to launch a ‘startup’ in 48 hours. The $15 budget? A domain name and a $5 Digital Ocean Cloud Server. No more, no less.

The definition of a startup is varied but for this weekend I’m going to define it as a website or service that could generate some income and could possibly get acquired. I’m not going to place any qualifiers on the amount of money it could generate, $6 a month to cover the hosting and domain and I’ll be happy.

Being that I only have 48 hours there’s going to be some obvious constraints on design, business plan, programming and everything else as I’m a one man band. If the idea gets traction then I can come back and add refinement.

To get up and running quickly I’m going to use Pyton with Flask and either MongoDB or PostgreSQL depending on my database needs.

Now all I need is an idea and I’m set.