The Jawbone UP is a wristband and app combination that tracks your movement, sleep and calorific intake. I recently purchased one from Amazon and have been wearing it for the last two days. These are my initial impressions, hopefully they will be useful to others considering the UP as there were some questions that I couldn’t find the answer to before buying. I will follow up in a few weeks once I’ve build up a track record of usage.

The wristband itself is a hard rubber with a more plastic texture, it’s reasonably flexible, something which the images I had seen before purchase didn’t convey. If you’re worried about the band fitting, there’s some flexibility in it. My wrist was slightly larger than the large model but it still fits. The wristband has a matte finish and a zigzag pattern on the outside which catches the light nicely. The widest, chunkiest part of the wristband is where the batteries, vibrating motors and sensors reside, the ends of the band are where you will find the sync connector, indicator lights and a single button.

The other end of the bracelet is capped with a button. There are two indicator lights on the edge of the wristband which are used to give you feedback about the mode that the device is in. A short press of the button will flash either a green ‘sun’ or a blue ‘moon’ to let you know if you are in daytime mode or nighttime mode. To change modes a long press of the button is required, the wristband will vibrate and the new mode light will show briefly. You need to manually change modes, change to night mode when you get into bed, change to day mode when you get out of bed.

There is also stopwatch functionality included, a short press followed by a long press of the button will start the internal stopwatch. A long press will cancel the stopwatch. There is no feedback given on the wristband itself about the timing of the activity, when you sync with the app, the timed event will be noted and you can add more information about it. There is no time display or any other feedback on the UP other than the mode light and the vibrating motor.

The wristband can also be used as an alarm clock which will gently vibrate you awake when your sleep is at its lightest phase within a specified time range of your desired alarm time. The alarm clock is set via the iPhone app. There is also an idle monitor which will cause the UP to vibrate if you have been inactive for a certain configurable period of time.

The Power Nap feature is a short alarm which wakes you up after an optimal ‘Power Nap’. This is turned on by pressing the button twice and then pressing and holding until the moon flashes.

The UP is charged via USB, it comes with a small three inch cable/adapter which you plug the UP into and then plug that into a USB port. The UP charges in less than 2 hours. The documentation says that there is no need to remove the UP from your wrist other than to charge it, but it’s important to remember that it’s not waterproof and I’m not sure if shower proof means rain shower or bathroom shower.

You can download the UP app from the iPhone App Store and recently an Android version has been released which you can get from the Play Store. The overall instructions received with the band are fairly minimal but they basically amount to download the App and plug the wristband into your phone. I’m using the iPhone app so this review does not reflect the Android version, if I can sync to more than one device I’ll set it up with my Nexus 7 and see how that goes.

When you run the App and connect your UP it will ask you for your Name and to give your UP a name. You will then be asked to create an account. Your vital statistics are recorded and used in calculations for calories burned etc. The UP App appears to be very comprehensive.

I won’t cover too many of the App’s features as they are a little more complicated than the UP hardware is. I’ll give a general overview here and I’ll come back to it if needs be in a future update.

Syncing with the App is simple; Open the App, remove the cap from the UP and insert it into the headphone jack on the phone. The App will detect that the UP has been connected and initiate a sync. The sync will tell you how many steps you have added, how much sleep you got, and it will give you the option to categorise any timed activities such as a walk or a run.

One of my main reasons for purchasing the UP was to monitor how much sleep I was getting, I’ve only used it one night so far, but it seems to be reasonably accurate overall. You set a goal for how many hours sleep that you want to get each night. I set it to the default 8 hours, last night I achieved only 82% of my goal with just 6 hours and 34 minutes of sleep. The App breaks that down for me even further. I fell asleep at 01:15, I woke up at 07:44, I had 2 hours and 21 minutes of ‘Light sleep’, 4 hours and 13 minutes of ‘Deep sleep’, It took me 37 minutes to fall asleep, I was awake in bed for a total of 42 minutes and I woke up 1 time during the night. Take a look at the image below to see how it is presented, along with a nice graph. 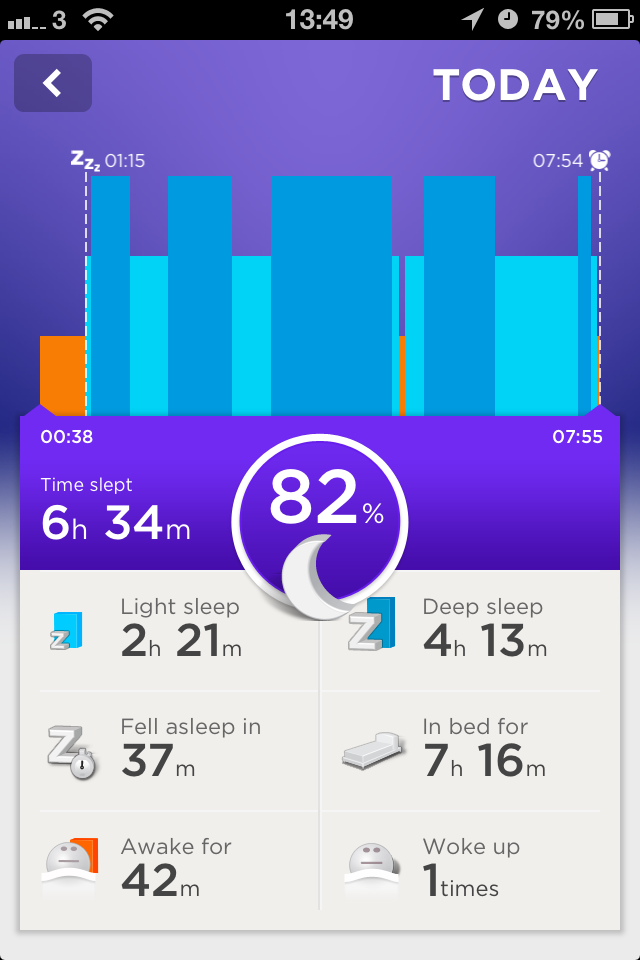 I can’t really take issue with any of those statistics due to not having any other way of measuring these but I definitely remember waking up several times during the night, however briefly, but the UP only registered one. I’m hoping to have a sleep study done soon, I’ll see if they’ll allow me to wear the UP and compare the results. They probably hate patients like me!

Your Daily activity is presented in a similar manner, you set a daily goal for the number of steps you wish to take. It recommends 10,000 steps but the average is around 6,000 so I chose 8,000 to not be too ambitious. I walked the equivalent of 4.48 miles, took 8,900 steps, and burned a load of calories! It’s important to calibrate your band by starting the stopwatch and walking a route for which you know the distance. This will help you get more accurate readings, my band was out by about 20% in its estimates before I calibrated it.

You can see how the information overview is presented in the picture below. You can also add other workouts to your day as well as keep track of your mood.

There are several features of the UP App that only become active after you’ve built up some data, Trends, Lifeline, etc. I’ll come back to these at a later date. The other main part of the App is logging your food and drink. It gives you a similar breakdown to other areas, but I’m not sure if I’ll use this part yet, there is the possibility that I can integrate it with MyFitnessPal which would be nice to stick with.

Smart Sleep Alarms are a handy feature which wake you up when you’re in a lighter state of sleep, within 30 minutes of the time you set. You are awoken by the gentle vibration of the UP. I have to say that it was a very nice way to wake up, when my alarm goes off I usually feel as though I’m being stabbed in the brain by demons, but not so with the UP. Again, I have no way to know if I was actually at my lightest sleep phase when I was woken up but it was very easy to get out of bed.

Idle alert can be configured to give you a buzz when you’ve been inactive for a configurable period of time, from 15 minutes to 2 hours. Just a reminder to get up and move about.

Overall I’m very happy with both the UP wristband and the App, they are both solidly constructed and beautifully designed. I’ll keep using it and I’ll write up a more in-depth review in a few weeks.