I regularly get asked ‘tough’ computer questions. Today a colleague had 3 folders, each with 100 70MB TIFF files, that he wanted to use as a PowerPoint presentation. My office PC (Windows XP, 1GB of RAM, I know, I need to ask for an upgrade!) was ill equipped to deal with the issue and even if it was speedier, I wouldn’t have had anything other than the basic Windows+Office+Visual Studio install.

I initially tried to import the images into PowerPoint as a photo album but that didn’t seem to work as it kept the gigantic resolution and file size of the TIFFs. I had my Macbook with me so I decided to see if automator could be used to complete the necessary tasks.

Automator is a secret weapon that’s installed on everyone’s Mac. It allows you to automate various tasks, move files, take screenshots, convert file formats and access functions from installed software, in this case PowerPoint and Pixelmator.

I hope to see the Automator interface used some day to allow more advanced control over the iPhone and its settings, I think it would serve perfectly as the iPhone equivalent of Android’s Tasker.

The tasks I needed to complete in order were:

It took me only a few minutes to put together the workflow and the results were perfect. 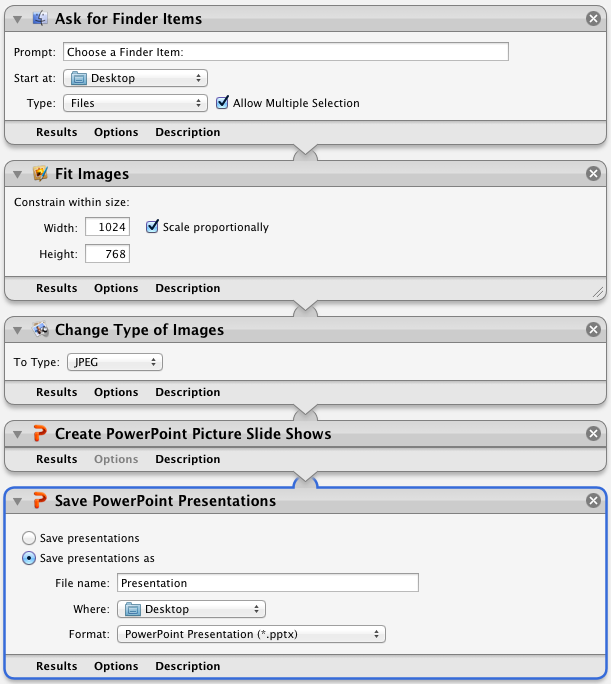